Home / Tech / Boss about own tube 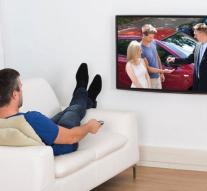 - TV viewers will soon have no more channels to purchase their cable company where they would never watch. They get more choice at the conclusion of a television subscription. As a result, it can also be cheaper.

According to a letter that Secretary Dekker (Media) today sent to the Lower House. He promises to enable cable operators to offer a la carte channel package.

Now the companies are legally obliged to provide a standard package with 30 channels. Less can not, and if a consumer wants other channels than are in the standard package, the person must pay extra.


Dekker wants to remove that legal obligation. He wants to make it possible for consumers to choose for example that they decline any RTL or SBS, but another theme channel. So everyone can create their own package.

That may also be a smaller package than the current standard of thirty, with only the channels that are important to consumers. 'Consumers do not always sit waiting for a standard menu of thirty channels imposed by the government. They want freedom of choice, 'Dekker explains. In this way, the TV subscription can be cheaper, the minister admits. 'But that's on the market,' he adds.

Complete freedom of choice is not there. The VVD state secretary maintains eight 'must-carry channels, stations must offer every cable company. That's NPO 1, 2 and 3 and the three Flemish public channels. In addition, everyone should receive a regional and local channel.


Research by the Media Commission shows that consumers do have ears to a la carte package. Almost two thirds indicates that it wishes to build the channel offering itself. More than half just want it if that leads to a cheaper subscription television. Also at the same cost 44 percent want more choice. Four percent are willing to pay extra.