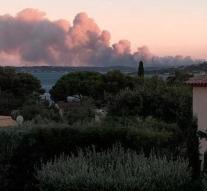 hyères - Due to a new forest fire in southern France, on Wednesday 10,000 residents and tourists evacuated on Wednesday. People had to leave their homes and campsites.

The fire extends over an area of ​​approximately 600 hectares near Bormes-les-Mimosas in the department of Var, reported French media Wednesday. The location is near the coast between Hyères and the luxurious seaside resort of St. Tropez. According to the first reports, no wounded cases have occurred.

In southern France and Corsica, there have been numerous forest fires since the beginning of the week, due to the strong wind and drought.