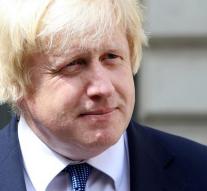 london - The plane which flew the brand new British Foreign Minister Boris Johnson Sunday to Brussels, had to make an emergency landing. The unit landed near London, a spokesperson of the Minister.

According to the Guardian, there was a problem with the hydraulic system of the jet and the fire brigade was called to Luton Airport. With some delay Johnson was his trip to Brussels, where he will meet his European counterparts, continue.

Boris Johnson, the former mayor of London and also brexit-advocate. He was to follow in the race to former Prime Minister Cameron, but dropped out.