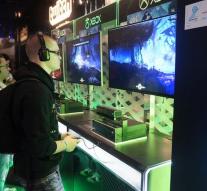 rotterdam - Bored young gamers and school leavers are made ready for security experts on the internet in Rotterdam. They are going to help the police of Rotterdam, the municipality, and the port company to fight against hackers better.

Twelve young people have the opportunity to start their hacking arts in the first Dutch cyber workplace from Monday. They come to the basement of a former bank building on the corner of the Schiedam West with the Witte de Withstraat. 'We chose Rotterdam because there are many young people whose parents do not have the money to buy a computer,' says initiator Astrid Oosenbrug.

'Most young people have been graduated from school because they were sibling on the internet. They laid off the network of their school bored. Their teachers knew no advice with them. 'Oosenbridge compares it with digital bell pulling. 'Some already join their twelfth. '

Together with two other internet experts, three months ago, the former PvdA Chamberlaider came up with the idea of ​​setting up the Cyber ​​Workplace. 'While in The Hague the call became louder for more staff for cybersecurity, more and more hacking young people came along with me asking if I knew a place for them. 'According to Oosenbrug, cybersecurity companies are looking too much on a candidate's profile and too little to what somebody can actually do. 'We jump in this. '

Through the workshop to learn the youth of a specialist in the field of ICT law when they are legally punishable on the Internet. 'They may, so to speak convert a drone to coffee or programming a robot otherwise. If they are challenged, 'said Oosenbrug. 'They also get the task of cracking the old vault in the bank building of 1928. '

Out of eight mentors, young hackers get support. Day and night they can go to the bank building. 'Often, young people with an autistic disorder need a protective environment to work. And they find them with us. '

The ultimate goal is to flow through a business internship to a job. 'We already have a rough diamond of fifteen years. '

According to Oosenbrug, the workshop must be for all ages. 'I even get applications from 50-year-olds who are no longer challenged by their employer and hope to find out here. Also they are welcome. 'There are also plans to set up a cyber workplace in Amsterdam.