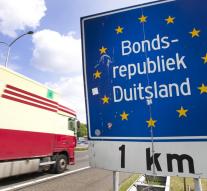 - The checks that Germany due to the influx of refugees in September introduced temporarily in Bavaria along the border with Austria has produced a nice catch. Thus, 183 people were arrested against whom ran an arrest warrant.

Furthermore, 411 smugglers caught in the collar, 22 cases of illegal possession of weapons discovered and dealt with 26 drug-related offenses. Together controlled the border police more than 824 000 people.

The German Interior Ministry announced Friday to deploy to another 150 people on border surveillance. At present, all 1,500 employees working on that.