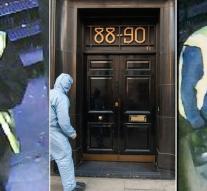 london - One of the perpetrators of the notorious robber safe in London earlier this year, the police led to his share of the spoils . The 58 -year-old Danny Jones on Thursday by a heavily armed escort taken from his cell , and he directed the officers to a cemetery in North London. There was a part of the stolen jewels, gold and diamonds buried.

In a letter to Sky News Jones writes that he wants to give back what he has stolen. Also because he is afraid that someone else is going to run off with the loot. The cemetery was partially closed during the excavation work. A police helicopter operation meanwhile kept from above eye. Much money on stuff is found, it is not yet known.

The police still refuse comment. Grinder Jones is one of four men who have pleaded guilty to the sophisticated burglary in the chic 'safe house' Hatton Garden in the eponymous district in London last April. The perpetrators made for 27 million of bullion loot.

The robbery was nothing short of spectacular. The criminals probably insisted in the early morning of Good Friday into the building. In the days before had jewelers away their valuables issued here, assuming that they were safe. Of the Storage vaults bulged with the jewels. Through the roof of the building came the robbers, after which she abseilden down an elevator shaft.

With heavy grinders sawed the invaders in the basement of the building two massive steel pipes and tried to force them through the safe door. In peace, they could then jewelry boxes open and plunder.

They took it, so suspect the police, four days before. FaillietIn total of ten people have been arrested for involvement in the heist. They all still waiting for their criminal case.

Hatton Garden Safe Deposit, which always vaunting itself as one of the safest storage companies for important and irreplaceable personal items, the blow is never recovered. Customers stayed away since the robbery and the company entered financial success; in heavy weather. Last month, announced the management to close the case.