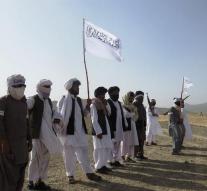 kabul - The Taliban have been made after days of heavy fighting continued gains in northern Afghanistan. Taliban fighters captured Saturday the Khanabad district of Kunduz province. In other districts are still heavy fighting going on.

According to local authorities, the Taliban attacked the district of Khanabad on several sides.,, We have resisted for hours, but we got no support, '' said the local leader Hayat Ullah Amiri. According to the Afghan authorities in Kabul were a lack of ammunition and a lack of reinforcements caused the fall of Khanabad.

The Taliban captured earlier this week even though area in the neighboring province of Baghlan. As the fighters made vehicles and ammunition.


Kunduz province where the Netherlands conducted a police training mission until 2013. Last year, the capital city fell into the hands of the Taliban. Although Kunduz was recaptured with the help of the Americans, the intake was one of the greatest military successes of the fundamentalists since the Taliban regime was ousted in 2001.

At the reconquest of Kunduz US aircraft bombed a hospital of Doctors Without Borders, in which dozens of people were killed.