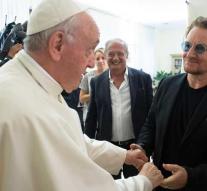 - Pope Francis had a private meeting Wednesday with U2 singer Bono in the Vatican. They discussed, among other things, the abuse scandal in the Catholic Church in Bono's native country of Ireland.

'I told him that I think the perpetrators were better protected than the victims. I saw the pain in his face and I think he is a sincere man, 'said the singer according to the Italian news agency Ansa. Francis recently visited Ireland.

Reason for the 30-minute visit was the support of the 58-year-old Bono for the papal project 'Scholas Occurrentes'. This school initiative aims to promote encounters between young people around the world.

Bono is known for his political involvement and had also met Francis' predecessor John Paul II.