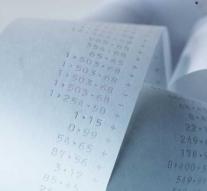 luxembourg - The European Parliament was entitled to refuse access to documents on the expenses of MEPs. The European Court of Justice ruled that in a case that a group of journalists from all 28 EU countries had filed.

The NOS was involved in the Netherlands.

In 2015, the journalists made wob requests in their own countries to view the receipts and declarations. They were rejected because of privacy protection and because it would involve too much work.

In addition to their salaries of around one tonne, members of the European Parliament receive around EUR 4400 per month for, among other things, travel and office expenses, staff and general expenses. They are not obliged to account for this.