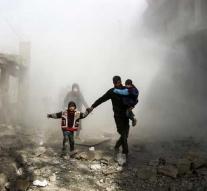 damascus - The regime of Bashar al-Assad accuses the United States of war crimes after a bloody confrontation that exposed the many dangers of the current struggle in Syria. Now that Islamic State has fallen away as a common enemy, there is high tension on the whole country, which is currently going through the deadliest week since time.

It is the deadliest confrontation between the coalition and the Assad regime so far, that the Americans accuse a 'massacre'. The militias want to take over the area that the SDF captured on Islamic State last year because of the many oil in the ground.

According to unconfirmed reports, the militias are supported by Russian mercenaries, which denies the Kremlin. The tensions in Syria are now rising so high that it is necessary to fear a clash between the great powers.

America recently announced that it would stay in Syria for a long time, among other things to reduce the influence of Iran and secure a future without Assad. This not only causes problems with the regime, Moscow and Tehran, but also with Turkey, since the Americans rely on the Kurds with their strategy.

Ankara has just started an offensive in the northwest Afrin. President Erdogan is determined to extend that operation to the border with Iraq. In doing so, he not only wants to prevent an autonomous Kurdish region, but he also intends to send the millions of Syrian refugees from his country to that area.

After Afrin, Manbij is the next Turkish target. But America made it clear again this week that an attack on that strategic city, where Americans are also stationed, will not be accepted. Two high generals visited Manbij this week, a clear warning to their NATO partner.

In the meantime, Russia and the regime keep a big house in Idlib and a rebel enclave near Damascus. In heavy bombing, in which several hospitals were hit, about two hundred people were killed this week. The Assad regime also used chlorine gas several times.

How schizophrenic the conflict has become is apparent, among other things, from the fact that pro-Assad fighters attack the Kurds of the SDF in the east, but at the same time the regime allows them to migrate to the front with the Turks via its territory.