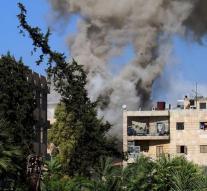 - After three days of relative calm in Aleppo air attacks Saturday again performed on the eastern part of the Syrian city, which is in rebel hands. It reports the Syrian Observatory for Human Rights.

Syria and Russia announced Thursday a fight to break. The two countries called both civilians and rebels in the city to leave through special corridors and promised people who leave the city safe passage. However, it was not made much use of the offer. According to the Observatory recent days were not carried out medical evacuations and relief supplies reached eastern Aleppo not.

Who carried out the bombing Saturday was not immediately clear.