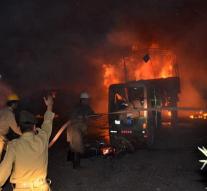 islamabad - An attack on a military vehicle in Pakistan claimed Saturday according to the army fifteen lives. Among the victims are seven citizens. Another thirty people were injured and hospitalized.

The bombing was committed in the city of Quetta, which is not far from the border with Afghanistan.

According to the Pakistani army, it is clear that it is a terrorist act, but who is responsible for the massacre is still unknown. Islamic extremists regularly attack in Pakistan.