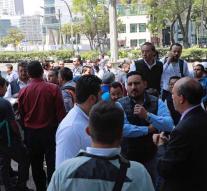 mexico city - In Mexico City, almost 11,000 people literally went to the streets after the offices of the Spanish bank BBVA had to be evacuated due to a bomb alert.

BBVA is housed in one of the most striking and tallest buildings in the city, the fifty-story Torre Bancomer. As a precaution, the Parques Bancomer building used by the bank was also evacuated in a nearby neighborhood.