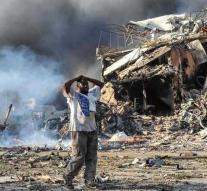 mogadishu - The Somali capital Mogadishu was again frightened by a bloody attack on Friday. Two car bombs killed at least eighteen people, at least twenty others were injured, said the ambulance service director. The explosions occurred in the vicinity of the presidential palace.

In October, a suicide bomber blew himself into a truck full of explosives at a busy intersection in the city. More than 300 victims were killed. Islamic fundamentalists of al-Shabaab are active in Somalia. This terror organization has links with al-Qaeda.