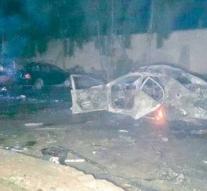 kabul - At least ten people were killed by an attack at a stadium in the Afghan province of Helmand. Meanwhile, even unconfirmed numbers of twenty or even seventy deaths are circulating. The perpetrator exploded a car bomb, says a spokesman for the governor. Dozens of people were injured.

A member of the provincial council, who witnessed the explosion, spoke of at least twenty deaths. 'It was just an action movie. I saw a huge flame shoot up, 'said the man.

In the stadium in provincial capital Lashkar Gah, a wrestling tournament was completed shortly before the attack. The bomb exploded when the spectators wanted to go home.

It is still unclear who is responsible for the attack.