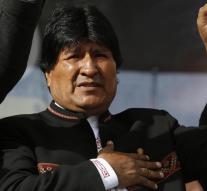 la paz - Bolivian President Evo Morales still wants a fourth term rule his country. However, the Constitution anchors that this is impossible. Saturday decided the party of Morales, the socialist party MAS, they do it for a fourth time as a presidential candidate for wear.

In February, a constitutional amendment required by Morales was still rejected by the population. This was necessary to govern a fourth term, but was seen by some as undemocratic.

Morales was elected in 2006 as the first president from one of the indigenous tribes. He is currently in his third term. Although Morales still has loyal, it does appear to have paid the price in the referendum for allegations of corruption and nepotism within his Socialist Party.

Morales looks whether it is possible to resign six months before the election so that he can join as a new candidate in the elections.