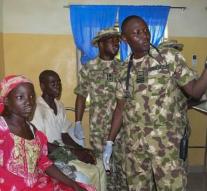 It is so far the largest group of girls released from the approximately 220 kidnapped in April 2014. Twenty-one were released in October following negotiations with Switzerland and the International Red Cross. A handful of others managed to escape or be freed.

President Muhammadu Buhari announced last month that the government was 'constantly' busy to release the girls 'and other abducted persons'.

Boko Haram is fighting in Nigeria and the border area of ​​Niger, Chad and Cameroon to establish an Islamic state. The violence has killed thousands of people and killed more than 2 million people.