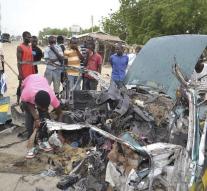 dakar - The number of minors being used by the radical Islamic terrorist organization Boko Haram suicide bombers in the conflict area around Lake Chad is rising alarmingly. In the first quarter of 2017 were already 27 children, often blowing girls, forced to. That's a threefold increase compared to the same period last year and almost the same as throughout 2016.

The figures are the latest UNICEF report, the United Nations Children '. Insofar as is known, since 2014 already 117 children in public places in Nigeria, Chad, Niger and Cameroon a bomb they had detonated with him.

' This is the most horrible way children can be used during a conflict, 'said Marie-Pierre Poirier, UNICEF Executive Director in West and Central Africa. ' These children are victims, not criminals. '' From increasingly fear for security check attacks adolescents and even babies near markets and other crowded public places. In 2016, nearly 1,500 young suspects were arrested, more than a third is still solid.