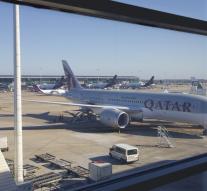 doha - A Boeing 777 from Qatar Airways has thirteen hours flown with a large hole in the fuselage because the device when taking off in Miami had hit the runway lights.

Before the departure of the flight to Doha, capital of Qatar, the pilot had zoomed in too far on his tablet with the map of the US airport. Therefore he did not know where he was, and he grew up in the wrong place. The plane flew with a hole of 46 centimeters further without an alarm went off.

According to The Register, an international news for the IT industry, the incident occurred in September. But now the Civil Aviation Authority of Qatar has reported on it. It is expected that the procedures are adapted to prevent recurrence.