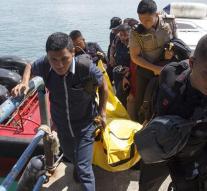 jakarta - Emergency services on Sunday found the first body of the thirteen people who were aboard the Indonesian plane that crashed Saturday. It reports the Jakarta Post.

A twin-engine plane of the police disappeared Saturday from the radar. The aircraft was en route between the islands of Banka and Batam, south of Singapore and is believed to have crashed between the islands and Mensanak Sebangka or Gentar. About fifty minutes after takeoff from Banka dropped all communication with the device away.

' We 'found wreckage, the head of rescue service left Basarnas already know before. It would be airplane seats, luggage and documents. Initially it was assumed that fifteen people were on board the unit.