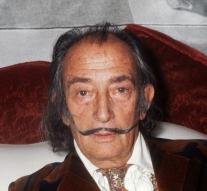 madrid - The body of the surrealist painter Salvador Dalí has ​​to be excavated. That ruled a court in Madrid on Monday, reports the newspaper El País. A Spanish woman spends the case because she says to be the daughter of the painter in 1989.

Since 2007, the woman has been fighting for recognition of Dalí's fatherhood and wants to prove it through DNA research. Her mother would have had a covert relationship with the painter in the fifties.