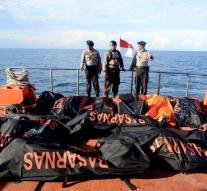 jakarta - Barely a week after the disaster rescuers have recovered forty bodies in the Indonesian island of Sulawesi. The death toll thus comes to 63. The ferry was last Saturday with 118 people on board capsized, according to official figures published Friday.

Fifteen passengers are still missing. The others were rescued, among them also the captain of the ship.

The ship was from the port of Kolaka North Sulawesi went to Siwa in the southeast of the country. Along the way the weather had deteriorated considerably. Due to the strong swell came water the ship in which it sank.