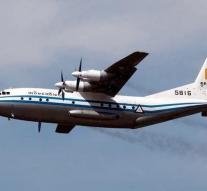 yangon - Rescuers have taken 31 bodies of occupants of the crash of Myanmar air force crash. The device with 122 people aboard wednesday on the coast of Myanmar due to an unknown cause in the sea.

On Thursday, the remains of the aircraft were discovered. On the Andaman Sea is a search including, among other things, five naval ships. No survivors were found.

The bodies found so far are 23 adults and eight children.