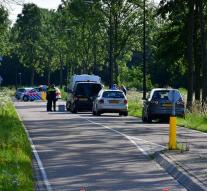 rijswijk - In the Hoekpolderpark in Rijswijk, near The Hague, a dead man was found on the street. The police do not exclude a crime.

The body was found early this morning by a passerby on the Van der Kooijweg. The hiker then alarmed the police. The victim is a middle aged man.

Last night, a body was found elsewhere in Zuid-Holland. Passers made the lugubere find at a ditch on the Herenwerf on a business area in Maasland, next to the A20.

The police can not tell anything about the victim's identity.