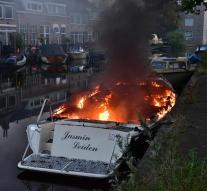 lead - Three boats in the water at the Haarlemmerweg in Leiden Tuesday morning fired. Two boats were completely destroyed by fire.

At a quarter past five firefighters acted after a report of two burning vessels. The fire initially thought that when one boat was someone on board, but this was not the case. Shortly after the first two were extinguished, a new report came in about a third fire in a vessel.

,, If multiple fires of the same type of object reported shortly after the other, then you can assume it arson, 'said the spokesman of the Fire Hollands Midden.


The damage to the vessel is large. If the owners are able to repair the wreckage, the fire can not say.

Police are investigating, but can not yet respond to the matter.