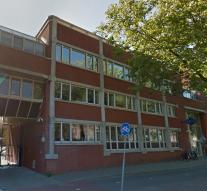 lead - The 19-year-old Bradley R., accused in an international hacker case, lives right next to the police station in Leiden. Partly because he bragged about it, he was caught. ' I live above a police station, they never do a raid, 'he told a Twitter friend.

He also sent a picture of the police which he had taken from his window. This snapshot is now part of the criminal file the FBI has compiled against him. Bradley and his American friend Zachary B. suspected of running a stalkservice. Also in the Netherlands is a criminal investigation against the Leidener.