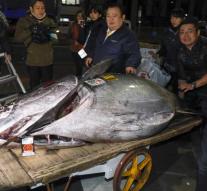 tokio - A 278 kilogram bluefin tuna was sold at the Tokyo fish market at the first auction of the year for a record price of 2.7 million euros. The buyer is Kiyoshi Kimura, the owner of the...

'The tuna looks so tasty and fresh, but I think I paid a little too much' Kimura said on the Toyosum market. 'I expected to pay around 50 or 60 million yen, but it was five times as much. 'In 2013 Kimura paid 1.3 million euros for a tuna of 222 kilos.

Internationally, there is strong criticism of fishing for bluefin tuna among the Japanese. The World Wildlife Fund has the fish species on the list of endangered species.