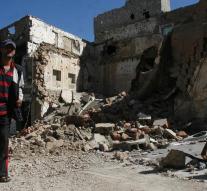 amsterdam - On the first day of the cease-fire in Yemen in clashes in the west of the country have fallen 21 deaths. They were introduced into hospitals where MSF is present, the aid agency reported Friday. The violence around the city of Taiz Thursday still made for a 'continuous influx' of wounded civilians and combatants in clinics on both sides of the front.

Alone in and around Taiz MSF took 76 people who were injured. Officially, since Thursday a ceasefire between several parties. As long as the government participates not there on, the conflict continues to claim victims.

Saudi Arabia, a major party, is well behind the cease-fire. The Houthi rebels from the other camp agree. They want to participate in a new government of national unity. But the current government of President Hadi sees such cooperation with the Shiite rebels absolutely not sit.

The UN hopes that pressure from Saudi Arabia, the file can still be a success. Hadi military has relied heavily on the support of a coalition led by the Saudis that the Houthis with heavy bombardment continues to have reduced.

Sure 10. 000 Yemenis have been killed by the civil war that broke out last year. The vast majority of the more than 21 million people depend on outside help.