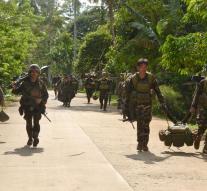 - In the southern Philippines have been slain in battle with Muslim extremists twelve Philippine military. Five other soldiers were wounded, the military announced on Monday.

Near the city Patikul came in recent days repeatedly to fighting between the army and members of the terrorist group Abu Sayyaf. According to the army were taking 21 fighters slain.

Abu Sayyaf beheaded last week a Filipino hostage. The group, which has sworn allegiance to the terrorist militia Islamic State, has more than twelve hostages in its power.