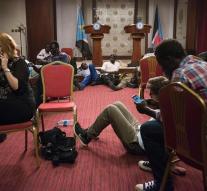 juba - More than 270 people in recent days killed in clashes in the capital of South Sudan, Juba. There are soldiers who clashed be loyal to each other at different tribes. Spokesmen of the government of President Salva Kiir said Sunday that there are victims 33 civilians.

The latest fighting erupted Thursday to form a new drama in a country that for nearly sixty years continuously plagued by war. South Sudan became independent in 2011 after a bloody battle of Sudan.

The end of 2013, fighting broke out between soldiers belonging to the Dinka tribe of President Salva Kiir and considered to be among the Nuer tribe of Riek Machar. Riek Machar was that year pushed by Kiir on the side. The two carry the largest (Dinka) and second largest tribe (Nuer) of the country. An estimated 300 000 people were killed and 400 000 fled the country. There would be by the violence are now a million people in South Sudan displaced.