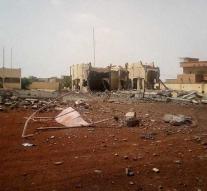 bamako - Armed men have shot fourteen civilians in a remote village in Mali. According to a Tuareg militia, the attackers belong to a criminal gang that is active in the border area with Niger.

The mayor of the Menaka area said that the attack on the village of Injagalane took place on Sunday. 'The attackers opened fire on people. We have information that fourteen people have been killed, all citizens. A truck and three other vehicles have been set on fire ', Nanou Kotia told Reuters news agency. The mayor did not say who he suspected of the attack.

The militia stated that the perpetrators had planned for the Tuareg citizens. Earlier this year, dozens of other members of that population group were killed in similar attacks on villages. That probably includes jihadists. Extremists in the country have also attacked Malian and international troops.