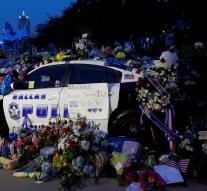 dallas - Thousands of Americans last night took to the streets to protest against the police violence and the shooting in Dallas in which five officers were killed.

In New York, Atlanta, Philadelphia, San Francisco and Phoenix demonstrations were held against police violence. Dallas police were overwhelmed by a sea of ​​flowers.

According to local media, the protests have been relatively quiet. Only Phoenix was pepperspay used against demonstrators. Atlanta was the biggest crowd on its feet. Ten people were arrested when they tried to demonstrate on a highway.


The shooter in Dallas has been identified as Micah X. Johnson. He acted out of anger about recent shootings in which African Americans were slain by police bullets.