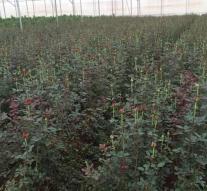 - Bloemenkweker Esmeralda Farms Netherlands in Bahir Dar in Ethiopia calls it quits. The US parent company of the nursery pull the plug because of the damage that rebels wreaking last week.

Certainly four flower farms near Bahir Dar became the victim in recent days of arson and destruction by rebels. A fifth farm was attacked, but to defend themselves. On several nurseries arson and pump houses destroyed by rain which is available only through water and an emergency. The companies are now additional security.

Esmeralda Farms is one of the affected farms. The company estimates the damage at $ 10 million. The loss of supplies from Ethiopia, the Dutch company has become fatal, says a spokesperson against the NIS.


The staff was informed Monday the decision. For fourteen employees applied in the Netherlands redundancy. The six hundred employees in Ethiopia are expected to lose their jobs.