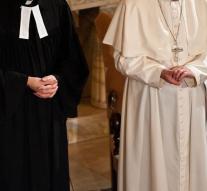 - The Icelandic parliament has repealed the law on the prohibition of blasphemy. Insulting a religion is there, despite protests from several churches, now legal.

The Icelandic Pirate Party made a case for changing the law after the attacks on the French satirical magazine Charlie Hebdo. According to the party freedom of expression need to know no limits. The small party was very pleased with the new law.

From 1940 it was true blasphemy was punishable by a fine or imprisonment of up to three months.


Several churches have, in vain, against the deletion of the opposition Law.