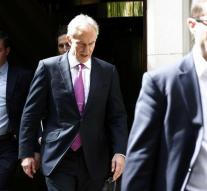 london - The alleged presence of weapons of mass destruction in Iraq, Saddam Hussein was the direct reason for the invasion of Allied forces in the country in 2003. The weapons were never found. Wednesday published a voluminous report in London over the British role in the Iraq war. Which may have far-reaching consequences for former Prime Minister Tony Blair.

The claim that the Iraqi regime had weapons of mass destruction, came from British intelligence services. Although Iraq had such weapons and have also deployed, including poison gas attacks on Kurds, Saddam had to destroy in the nineties. He did so in secret to save face, but this was the West believe that they do not disappear but were blocked.

Critics have always said that the claim was only an excuse to start the war and that the US and British government had decided long ago that they wanted to dislodge Saddam.


The report by Sir John Chilcot, the reputation of Blair and the then Foreign Secretary Jack Straw inflict serious damage. According to several British media were senior figures in the Labour Party and the Scottish National Party are planning to start impeachment proceedings against a so-called Blair as getting sharp criticism. That could mean that Blair never able to fulfill a function or even go to jail to it.

Labour leader Jeremy Corbyn, who voted against the war at that time, would stick to his position to condemn Blair. The confidence motion that was adopted at Corbyn last week that he laid down next to him, it would have had to occur.

Chilcot has ahead of the publication of the report had criticized the slowness with which ran the study. It took seven years. The report contains 2.6 million words and who wants will have to pay 900 euros are translated for the twelve-volume work.