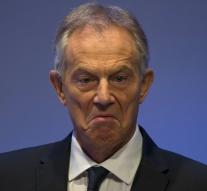 - Former British Prime Minister Tony Blair 's sorry for "mistakes" made ​​around the invasion of Iraq in 2003. " But I find it difficult to provide apologize for removing Saddam," Blair said in an interview with CNN.

The former prime minister admitted in the interview that some information is not correct. If the dictator did not possess weapons of mass destruction " in the way we thought. " Blair have stressed earlier that Saddam had used chemical weapons against his own people.

The British boat further apologizes for " some mistakes around planning. And certainly for our misjudgment of what would happen after the removal of the regime. " After the fall of the dictator sparked sectarian violence in Iraq.

Blair stressed it is still not clear what is effective approach in such situations. " We have sent troops to Iraq. We have an intervention without troops tried in Libya and we have not intervened in Syria, where we have just demanded that the regime would leave. "