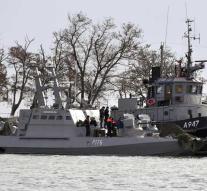 moscow - 'A planned provocation of Ukraine, in cooperation with the United States and the European Union.' This is how Russia describes the blown-up conflict between the two countries, whereby Russia prevents the passage of Ukrainian ships to the Sea of ​​Azov.

According to Russia, the entry of Ukrainian ships was in line with international rules because the vessels violated the territorial waters of Russia. Ukraine in turn accuses Russia of military aggression.