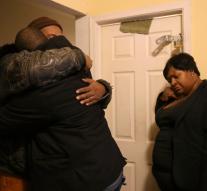 - Police operations in the US white officers against black residents again under fire. Following the death Saturday of two black residents of Chicago, a 19-year-old boy and and 55-year-old woman. This woman, according to the police 'accidentally' slain by police, reports CNN.

The police came down on a report of a domestic quarrel. The 19-year-old boy would have threatened his father with an aluminum bat and suffering from a mental disorder. Spot the boy, according to the police was very aggressive and was therefore shot. According to local media, he was waving the bat.

Include neighbor, mother of five children, was shot accidentally. The police,, expresses its deepest sympathy to the family and friends of the woman . An investigation into the incident has been set.

Although the exact nature is not yet clear, the families of the victims accuse the police of excessive responded. Mayor Rahm Emanuel does not get ahead of ourselves. In a statement he says that,, every time an officer uses force, people deserve answers. And regardless of the circumstances, we mourn the loss of one's life in our city.

The incident follows weeks of demonstrations against the police in Chicago. Thousands of people took to the streets recently after a video was released which shows that a 17-year-old black man for no apparent reason in Chicago is shot by a white officer. The officer is accused of murdering the teenager.