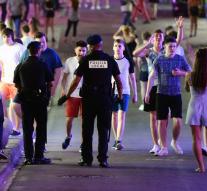 - Neighbours of a popular but notorious beach on the Spanish island of Mallorca, the nuisance of drunken tourists was such that they started a protest. They show a black flag fluttering on their balcony which they want to indicate that visitors should respect the area around Arenal Beach, southeast of Palma de Mallorca.

According to local media fluttering there since Wednesday,, black flags against booze tourism '' and the action steadily expanding. The action is not directed only against foreign sunbathers, but also against Spanish students celebrating the end of the school year with rowdy beach parties.

The authorities on the Spanish island have been working to bring things which quieted. In some places, for example, prohibited the streets drinking alcohol. Providers of 'booze tours' get fines.