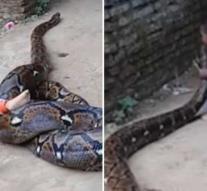 jakarta - A game of football had also been fun, but this boy thought differently about that. Images that show that a toddler on the Indonesian island of Java, with a giant python playing, go viral. The boy is sitting quietly and carefree with the meter-long snake.

The play is filmed by a supervising adult. Possibly one of the parents of the boy. As the snake creeps away, the little boy slides down on his back.

Then the toddler grabs the head of the snake, to guide him in a different direction.

According to experts, it is a net python, which is used as a play apparatus in the video. These snakes can be up to seven meters long. The python may not be a poisonous snake, yet the reptile has many fatalities on his conscience. The jaws of a net python are flexible enough to swallow a human being at once.

The images of the bizarre incident appeared on YouTube a few days ago. The video has now been viewed tens of thousands of times. People react shocked. 'That boy is lucky that the python had already eaten', someone writes. Another calls it 'irresponsible' that the parents let their son play with the snake.

Watch the video below: