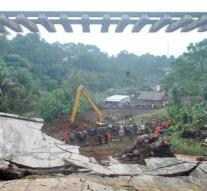 bogor - Bizarre images because of the natural violence in Indonesia. Due to the heavy rainfall, a complete hill was washed away at Warung Menteng, but to everyone's dismay the railway between Bogor and Sukabumi was spared. The track now floats over a length of tens of meters as a sort of pergola above the ground.

The authorities in the capital Jakarta have evacuated thousands of people because of flooding. Heavy rainfall also caused landslides in neighboring cities, including in Bogor.

Several people were killed in the various landslides.