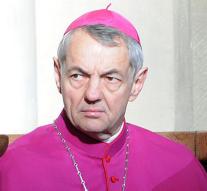 - At a conference of bishops in Germany is a military intervention in Syria called defensible. The bishops came to this conclusion given the very difficult situation of Christians in the civil war raging in the country.

" Military intervention should never be considered normal and there should always be working on a peaceful solution ", said Archbishop Ludwig Schick Monday. " But with a terrorist organization Islamic State of negotiation impossible. "

Very many Syrians have recently fled the country because of the terrible war. Many Christians have been tortured and murdered by terrorists of IS.