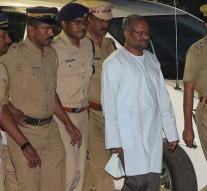 new delhi - The Indian police have arrested a Roman Catholic bishop for raping a nun. The nun had said that bishop Franco Mulakkal misused her several times over a period of two years.

Mulakkal is the head of the Jalandhar diocese in the northern state of Punjab. The bishop has denied in several interviews that he has raped the woman.

Last week he asked the Vatican if he could temporarily retire as a bishop due to all the fuss. The Vatican has granted this request.