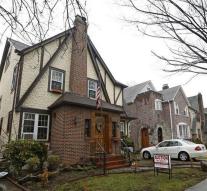 new york - People who want to spend a night in Donald Trump's birthplace can now convert 634 euros. The property is on Airbnb, so news magazine TIME reports.

In the house in Queens, New York, Trump lived until his fourth year. According to the advertisement on the rental site, there would not be much changed since the birth of Trump in 1946. The kitchen is original and the furniture resembles that of the Trumps at that time.

An anonymous buyer bought the house in March for about 2 million euros. He says he has no ties with the American president or his affiliates.