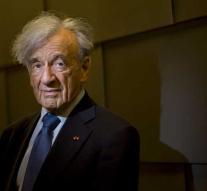 bucharest - In the Romanian village of Sighetul Marmaţiei, unknown people have daunted the birth house of Nobel laureate and Holocaust survivor Elie Wiesel with anti-Semitic slogans. In fluorescent pink letters they wrote that the 'Nazi Jew' Wiesel 'is in hell together with Hitler.'

The Elie Wiesel Institute in Bucharest mentions on its website the geklieder 'an attack against the memory of Elie Wiesel and all victims of the Holocaust. '

The writer who died in 2016 was deported to Auschwitz with his family in 1944, where his mother and sister died. His father died in Buchenwald. In 1986 Wiesel received the Nobel Peace Prize for his commitment to human rights.