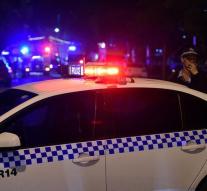 sydney - A birthday party in Sydney's Sunday bloody ended. The game suddenly turned into a huge stabbing in which a teenager was slain and six others were injured. That report local media. Details of the incident are not known. Police in Australia have no one to arrest.

The young victims were celebrating the eighteenth birthday of a friend at his house. A sixteen year old boy was taken to hospital in critical condition but later succumbed to his injuries. The age of six wounded varies from sixteen to 21 years.