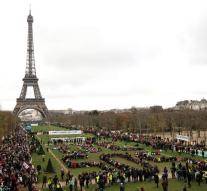 paris - The nearly two hundred participants at the UN climate summit in Paris Saturday have adopted a binding climate agreement. After more than a week of meetings, they agreed. The treaty aims to reduce greenhouse gas emissions. All participating countries should adhere to the objectives of the Convention.

After the announcement that the treaty was adopted, burst into the room a minute- long applause and cheers.

Key points of the treaty : to retrieve limiting global warming to a maximum 2 degrees to 1.5 degrees as the target, the substantial reduction of greenhouse gas emissions and invest in poor countries who are struggling to climate objectives.

French President Francois Hollande said earlier Saturday when the draft was published, a historic agreement. According to his minister Laurent Fabius, who will chair the conference, the treaty will lead to a turning point in the use of fossil fuels.