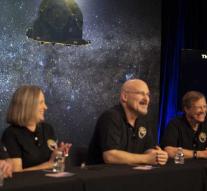 houston - The first images of the billions of years old space rock Ultima Thule have arrived. The American probe New Horizons flew past Tuesday, at 6.6 billion kilometers from the earth.

The people behind the mission think that the two parts of Ultima Thule have already merged in the early years of our solar system, some 4.6 billion years ago.