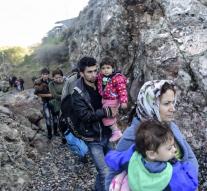 brussels - Turkey may get 3 billion euros in aid from the European Union for the refugees in the country. The EU would be visa-free travel from October next year and renewed calls for accession to the Union of Turkey hold out the prospect, as the Turkish Government actively to participate in a solution to the refugee problem.

This is contained in draft conclusions of the summit of the EU and Turkey to be held Sunday in Brussels. Turkey and the EU go according to the document active cooperation to prevent people who are " in need of international protection have " travel to Turkey and the EU.

Also, people who are already in Turkey or the EU received returned quickly. In return, Turkey would be a step closer to joining the European Union. The concept of document forms the basis for the calls in Brussels. Probably the conclusions are adjusted.