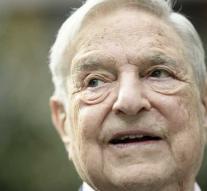 berlin - The Open Society Foundations (OSF) of philanthropist and billionaire George Soros has moved to Berlin and started working there. According to German media, it will be eighty employees and their families for the time being, but ultimately 150 people will work for the foundation in the German capital.

Soros, a Hungarian survivor of the Holocaust, moved his foundation from Budapest to Germany because of the increasingly repressive political and legal climate in the Central European country. The foundation is committed to human rights and democratic governance.

Soros was for a long time at odds with the government of Viktor Orban because of his sharp criticism. According to OSF there was a hate campaign against the organization. Soros' foundation also has offices in New York, Washington and London.